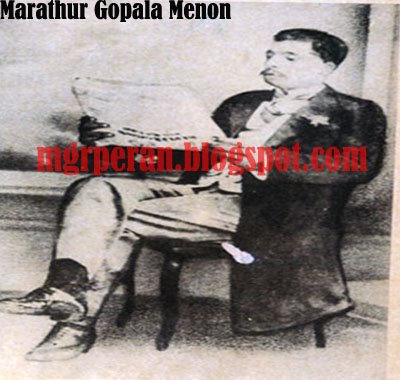 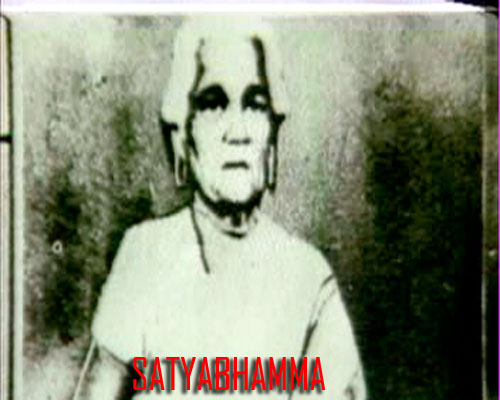 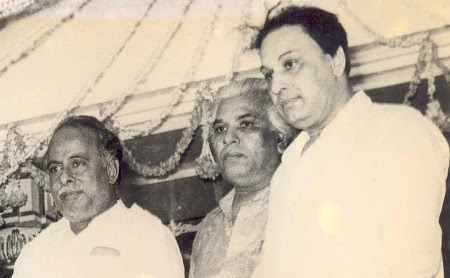 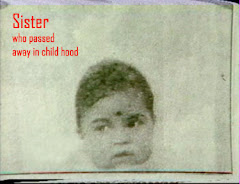 Sister -who passed away in child hood
Marathur Gopala Menon and Satyabhamma had only two sons and only one daughter . M.G.chakrapani the eldest and M.G.Ramachandran the youngest and the daughter was in the middle ,and passed away when she was very young .
They were born in Nawalapitiya near Kandy in Sri Lanka. Their father was a magistrate and their mother was a house wife. After their father ‘s death ,they came to india and wanted to settle in kerela ,They went to Marathur Gopala Menon 's another wife ,they were staying in kerala , but the another wife (those children are only Kamalakshi, Sumitra,Balakrishnan )treated them very badly and drove them away. After that they went to Burma and Rangoon and stayed for some time ,and came back to Erode in Tamil Nadu , and stayed for some time in their relatives ‘s house after that only they came to Kumbakonam and settled .Their mother worked in several places and wanted her children to go to school . But, she founded very difficult to send their children to school ,so near by their was a drama troupe and her mother joined them , in the drama troupe for some years .

Later , he started to get film offers and he soon became a popular actor. His popularity as an actor proved to be a blessing in disguise.M. G. R first married to Bhargavi in village.After Three Months of Marriage she died of illness. He later married Sathanandavathi who also died soon due to tuberculosis. His third wife was V.N.Janaki, a former actress. Without divorcing her husband Ganapati Bhat, She got married to MGR.He did not have any biological children.M.G.Chakrapani Married to Meenakshi Chakrapani and had Ten Children ,Seven Sons and three Daughters .Two Sons ,M.G.C.Balu Passed away 2yrs back on DEC 08 .2006 and M.G.C.Sukumar Passed away recently on Jan 1st 2009

In 1953, MGR joined the Dravida Munnetra Kazhagam. He became a member of the state Legislative Council in 1962. He was first elected to the Tamil Nadu Legislative Assembly in 1967, and subsequently in the elections of 1971, 1977, 1980 and 1984. In 1972, he founded the All India Anna Dravida Munnetra Kazhagam (AIADMK), which contested and won the subsequent elections. In 1977, he became the first film actor in India to become the Chief Minister of a state. He continued as the Chief Minister for the rest of his life In October 1984, MGR was diagnosed with kidney failure and was rushed to the U.S. for treatment,and his niece M.G.C.Leelavathy donated kidney to him. Tamil Nadu and over 100 people attempted self-immolation.
He died on December 24,198 7. 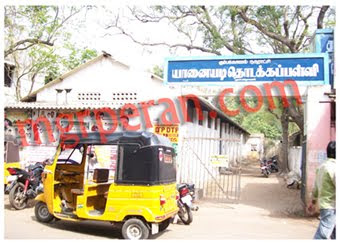 M.G.R & M.G.Chakrapani Studied In This School 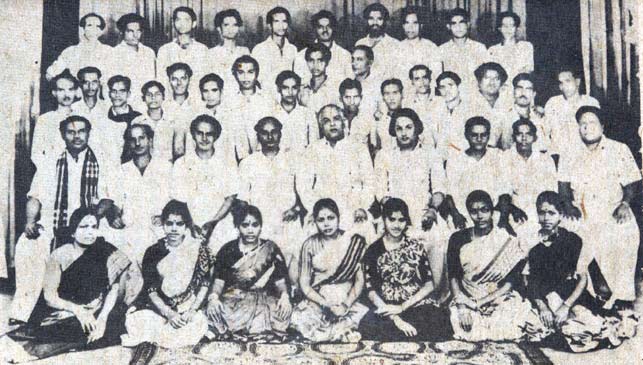 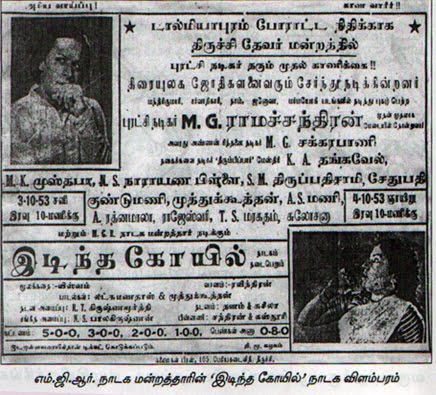 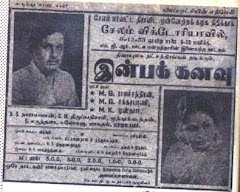 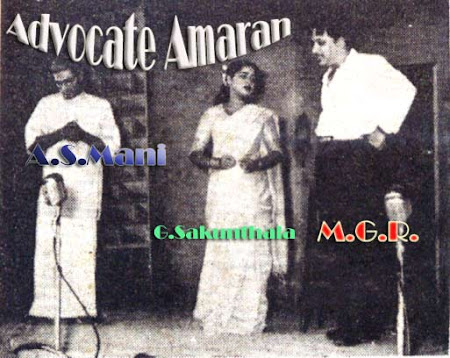 MGR would also make sure that he will teach good manners and discipline to the people through his movies. 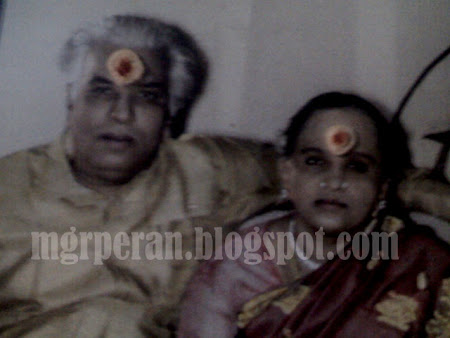 M.G.Chakrapani and his wife Meenakshi Chakrapani 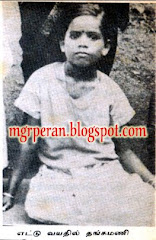 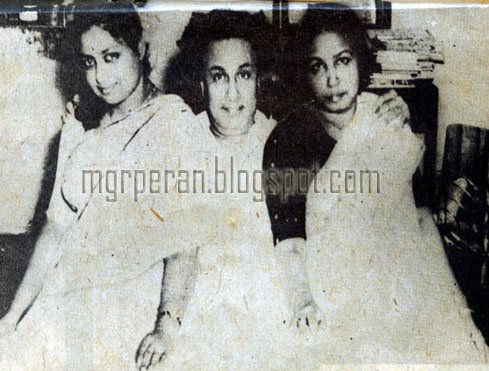 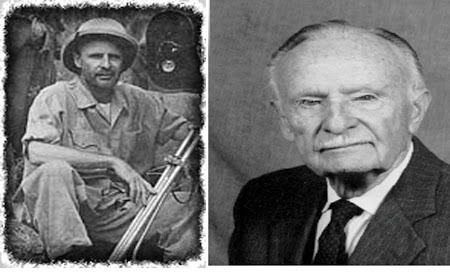 ELLIS.R.DUNGAN- Director who introduced our great leader thiru MGR in the movie "Sathileelavathi" 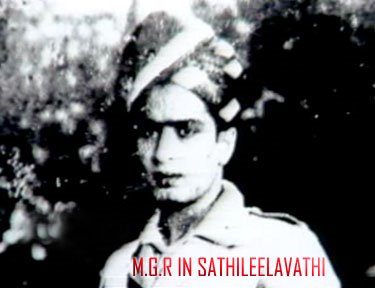 M.G.R as Inspector in the film "Sathileelavathi" 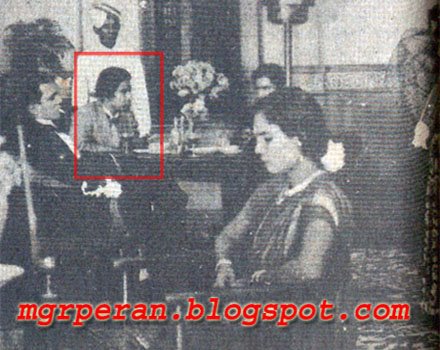 M.G.R & M.K.Radha in the Film "Sathileelavathi" 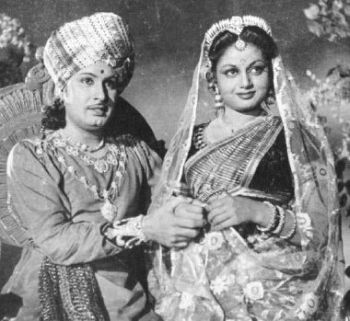 A Still From "Veera Jagadish" 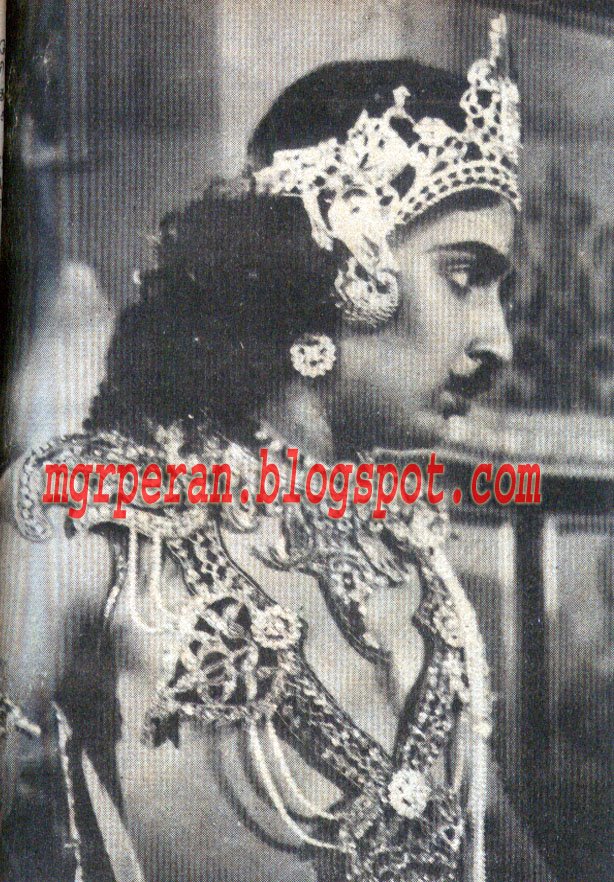 M.G.R in the film "Prahalatha" 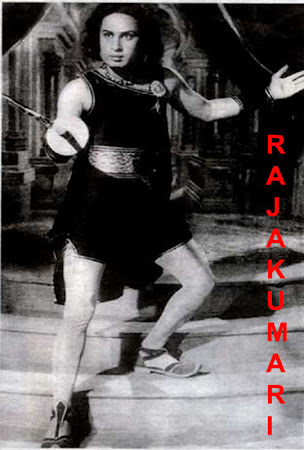 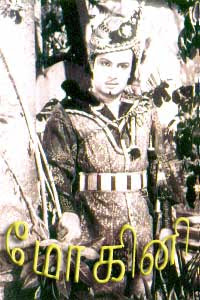 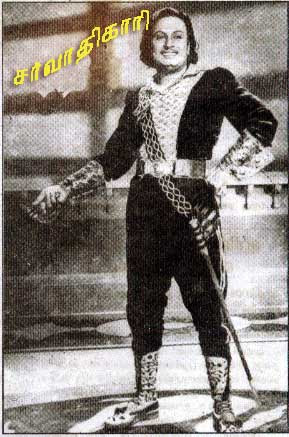 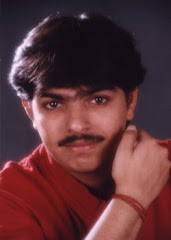 Get Your Own Scroller


This site is about Former chief minister & Legend Actor thiru MGR and his elder brother, a character actor and director thiru M.G.Chakrapani and about their blood related family . 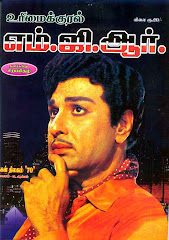 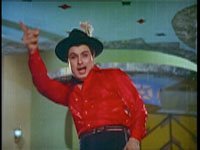 M.G.Ramachandran was the first film star to become Chief Minister of a state.

Director P.Neelakandan directed a maximum of films of 17 for MGR

According to the New York Times (October 29, 1984 ), the situation became so alarming that the state’s then Finance Minister V.R.Nedunchezian had to appeal to the people not to attempt self-immolation because it would not help the ailing leader MGR.


When MGR died in December 1987, more than 100 people are said to have killed themselves many of them presumably by burning themselves.

In the film "kaathal Vaahanam" Produced by Devar Films, Directed by M.A.Thirumugam. M.G.R had acted in a song & a scene and appeared in the get-up of an Anglo-Indian lady.


Mayakkum Maalai Pozhuthey Nee Po Po was orignially composed by KVM for the film Koondukkili, but later used in Kulebagavali in which VR were MDs. Both are RR films.


Ulagam Sutrum Valiban was shot in a huge manner. There was not sufficient lighting for several overseas scenes. So MGR erected about 40 settings in Sathya studio to overcome these flaws. Even he took painful effort to get the best out of MSV. He even rounded up convent school girls to produce the laughing sound for the song "Sirithu Vazha vendum" Of course there are inner stories for every song of success of every film

Director K.Balachander had written story & Dialogues for Makkal Thilagam .And the film was "Deiva Thai".This was his first movie. 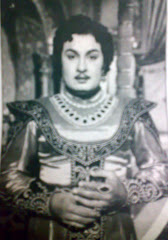 Nerungi Nerungi Pazhagum Pothu was orignially composed by KVM for a film for MGR that never was released. But this song was used in" Netru Indru Naalai" in which MSV was the Music Director.

In 1956 Mahadevi was being produced. Kannadasasn wrote a song for a park situation. The kathali (lover girl)would wait for a long time and sleep off. The kathalan(lover boy) would come later and rubs her face gently to wake her up. She wakes up to her shock. Then the song goes. "Naanandri Yaar varuvaar. Ilam Nangai Unai veru Yaar thoduvaar" MGR did not like this song. So Kannadasan replaced it with "Kan Moodum Velayilum kalai enne kalaiye". Kannadasan was wild with MGR. Several other pressures forced him to produce his own film.


There was a song that Vali wrote for a BR Bantulu film Nadodi. But MSV rejected saying that the song should be used in Raja Rani story and not in films with social themes. Vali liked the song so much that he gave it to KVM for the film Arasa Kattalai. KVM, MGR and everyone else accepted the lyrics in toto. The song, which is one of the best of Vali is:
"Putham Puthiya Puthagame-Unnaip Puratti Paarkum Pulavan Naan Pothikai Valartha Senthamizhe Paattil Vadikkum Kavingan Naan.